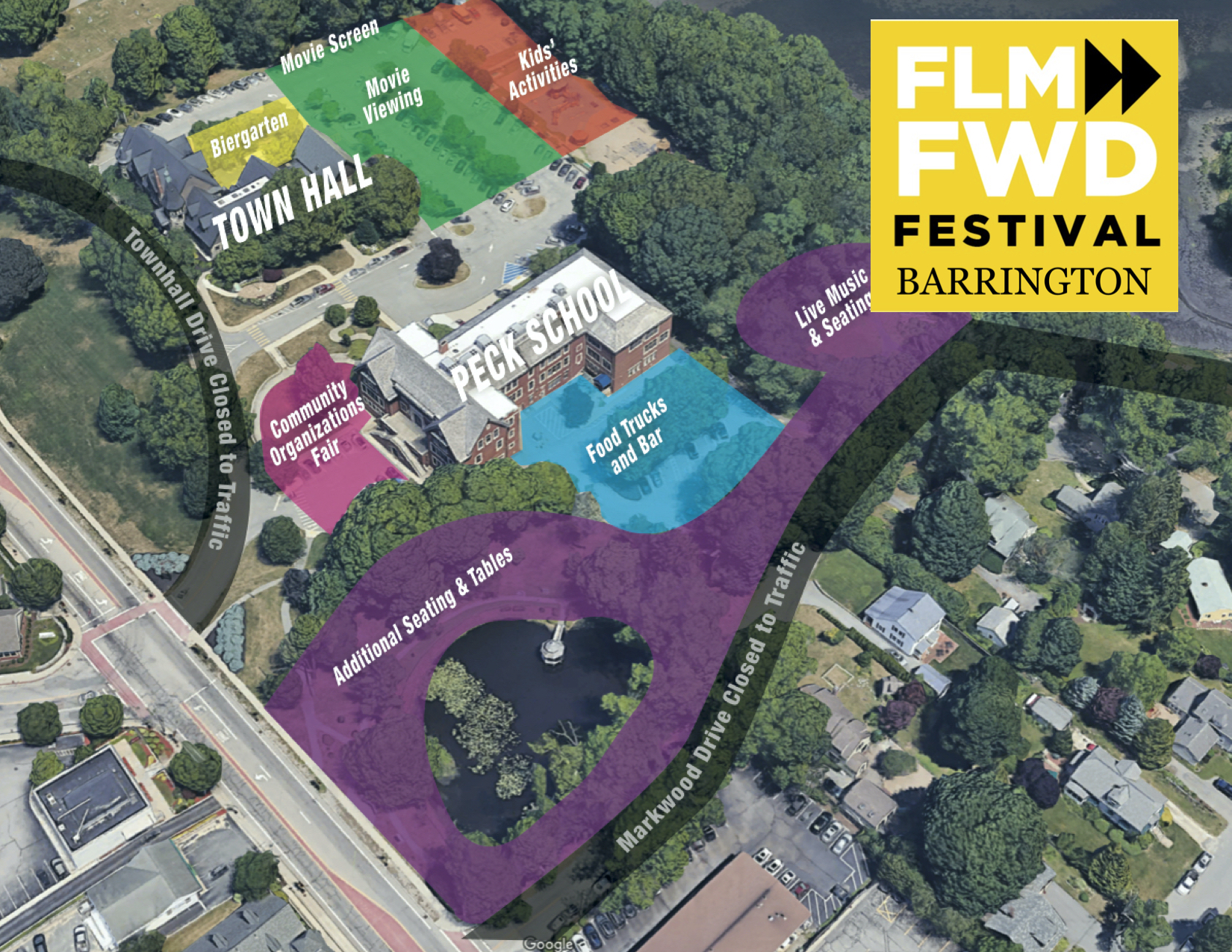 Community is more important than ever. The event transforms Town Hall's stunning campus into a festival village with spaces for eating, drinking, listening to music, kids activities. There is a community outreach section filled with local organizations. Films are shown on a massive 40-foot screen. 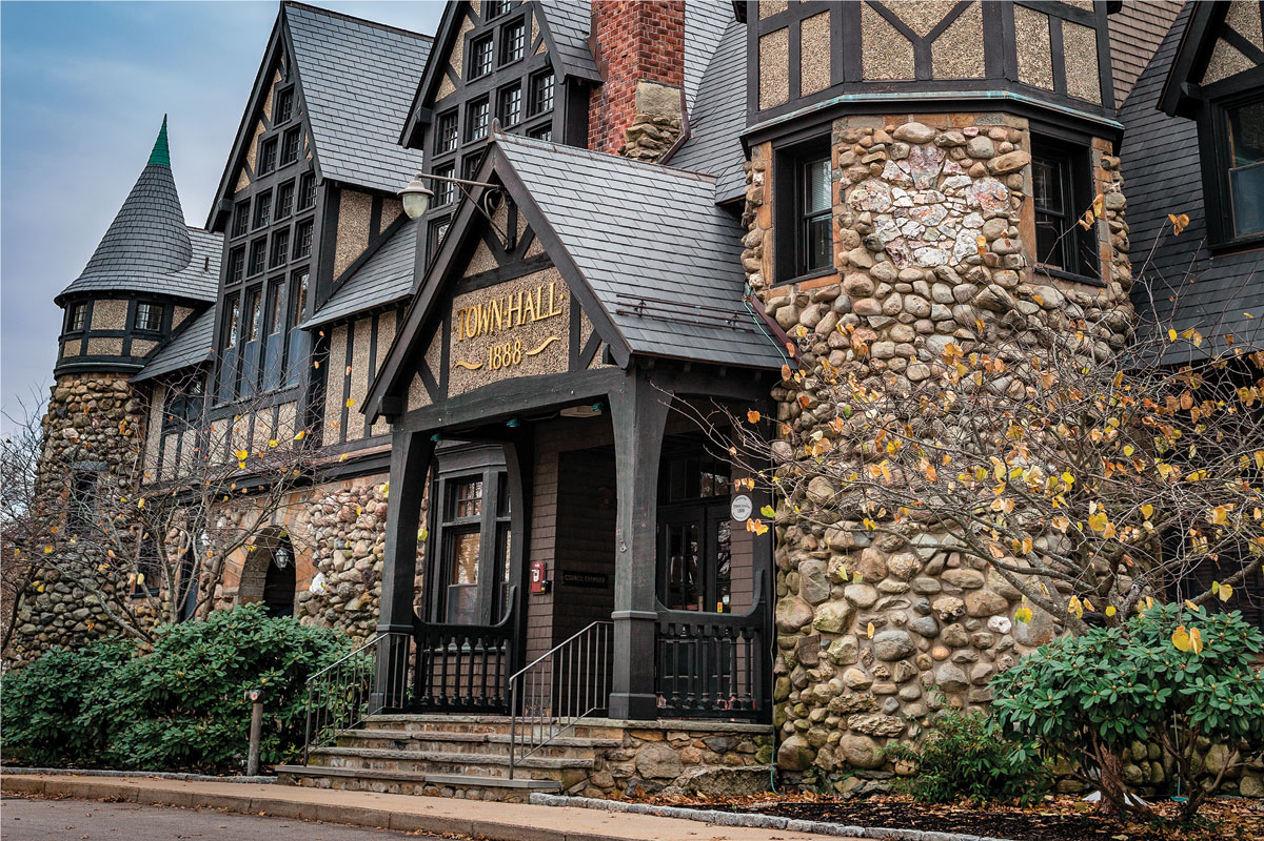 When it was conceived at the end of the 19th century, the town hall was truly the center for it all: besides offices, a school, and a library, the Town Hall housed a police department and a small theater/auditorium that was rented out for productions and social occasions.

Leaning into our origins 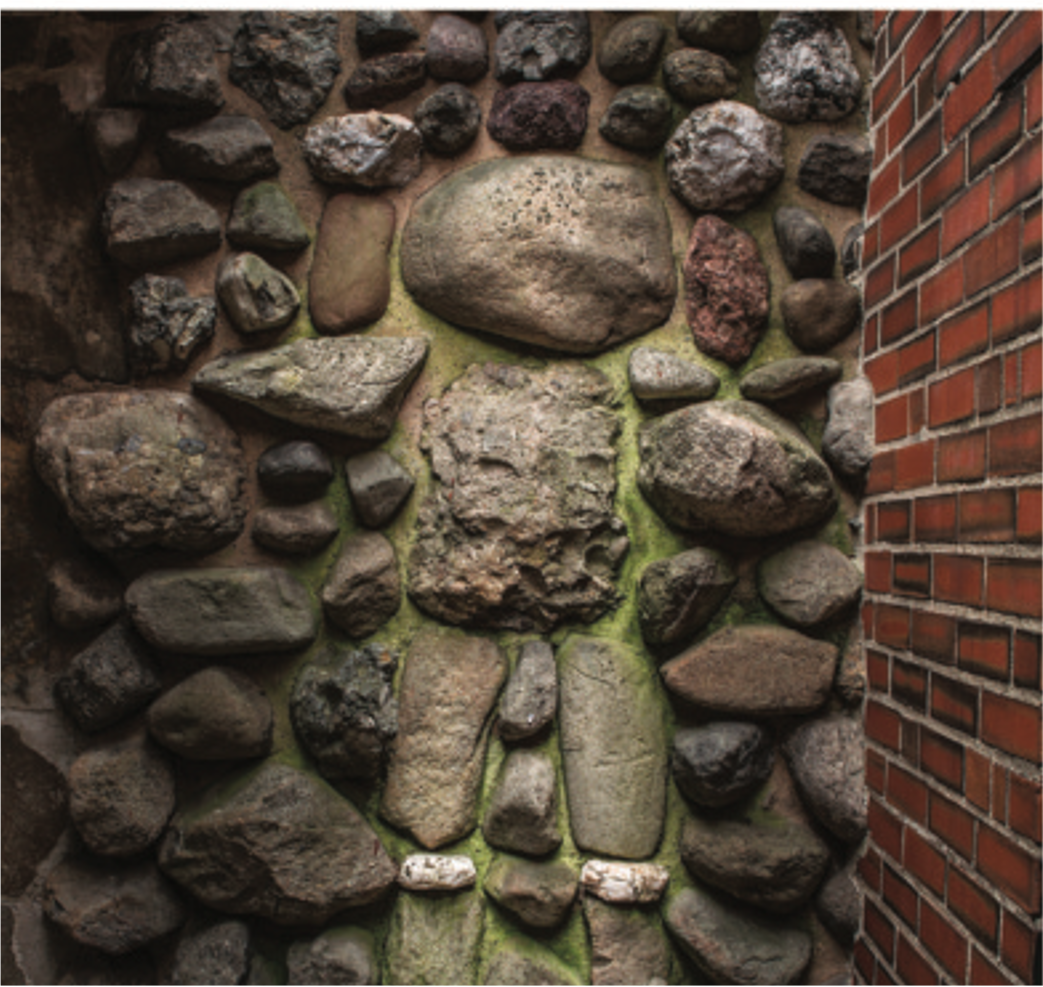 Our town hall was built in the late 19th century and is listed in the National Register of Historic Places. The building was constructed with tremendous local community engagement. At one time a rich agricultural community, the local farmers were asked to bring their field stones to the site of the town hall's construction. The masons created this unusual and whimsical 'stone man' was i in the stonework of the façade of the Town Hall near the back entrance. 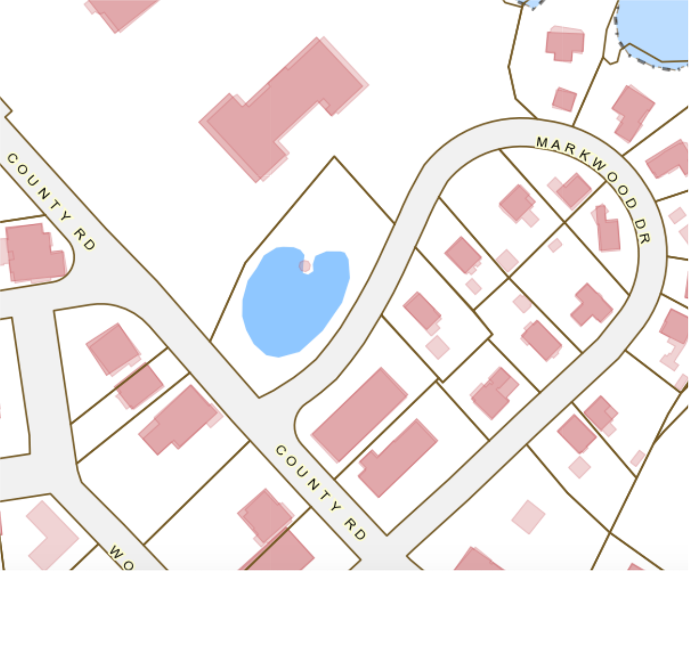 All roads to the town hall campus are closed to create a safe walkable area, limiting access to the adjacent Markwood Drive only to its residents.

Parking is courtesy of the town's businesses, churches as well as the YMCA. Please consult our parking map which includes handicapped access information.

We ask attendees not to use parking spaces in front of the entrances of businesses that are open during the festival hours and to respect the 'patrons only' signage.

If you're interested in talking with someone on our team about FLM FWD, tap the "Press Inquiries" button below and it will open up your email client. If you prefer to manually send us a note, please send your inquiry to pressinquiries[at]flmfwdfestival.org

Be sure to enclose your contact information and publication! 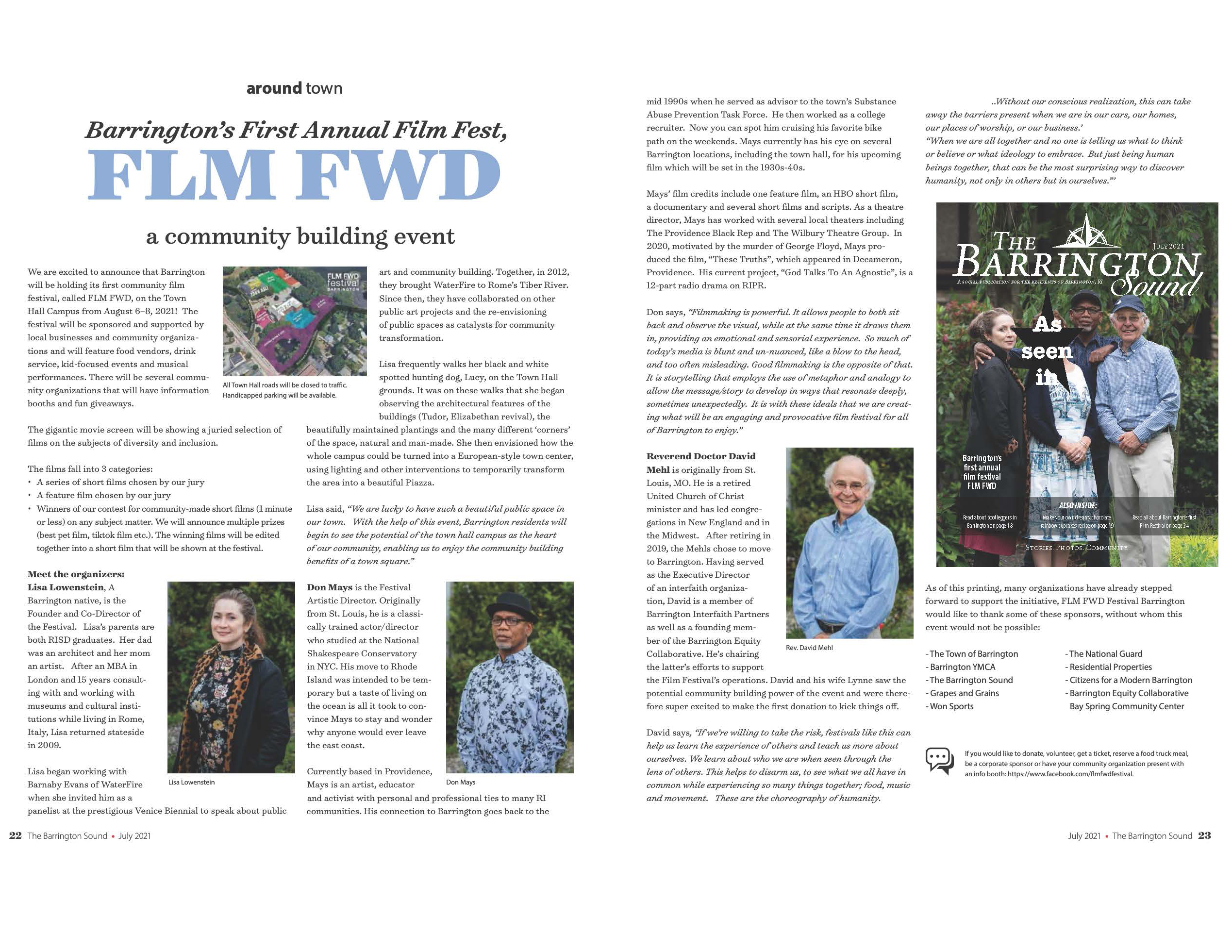 We celebrate our community partners 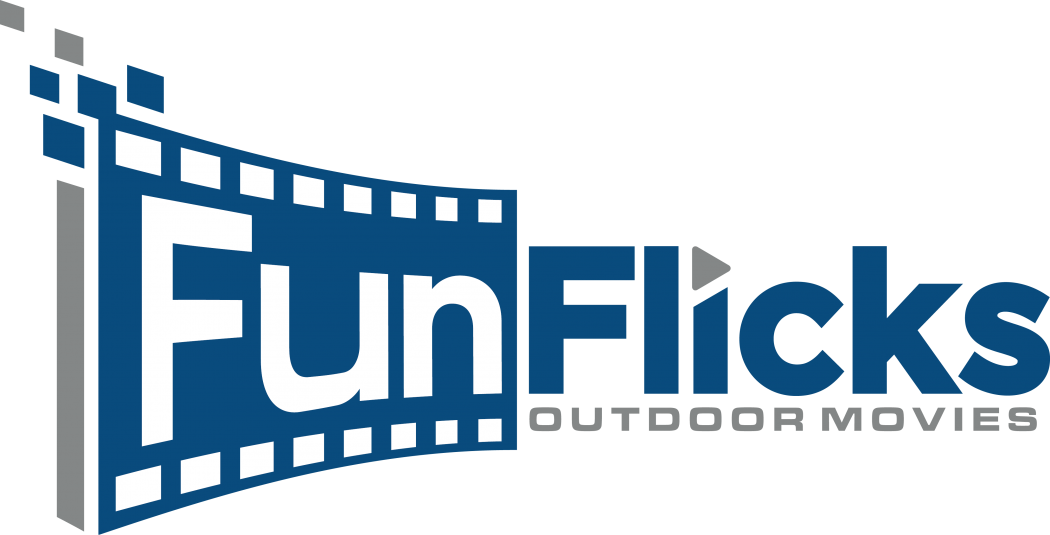 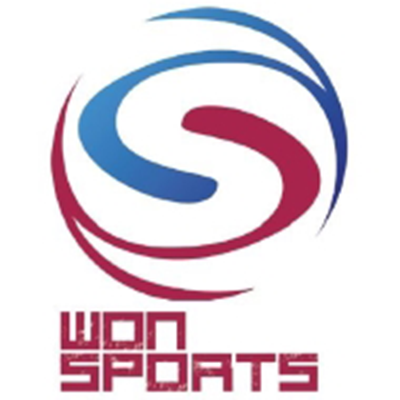 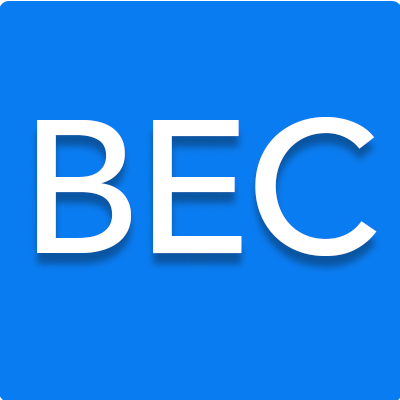 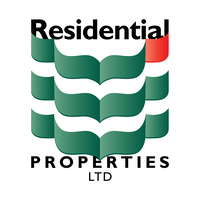 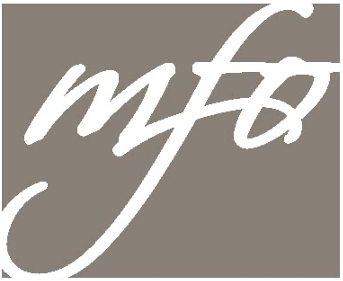 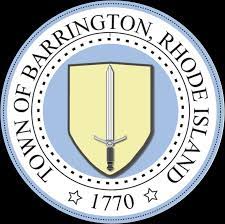 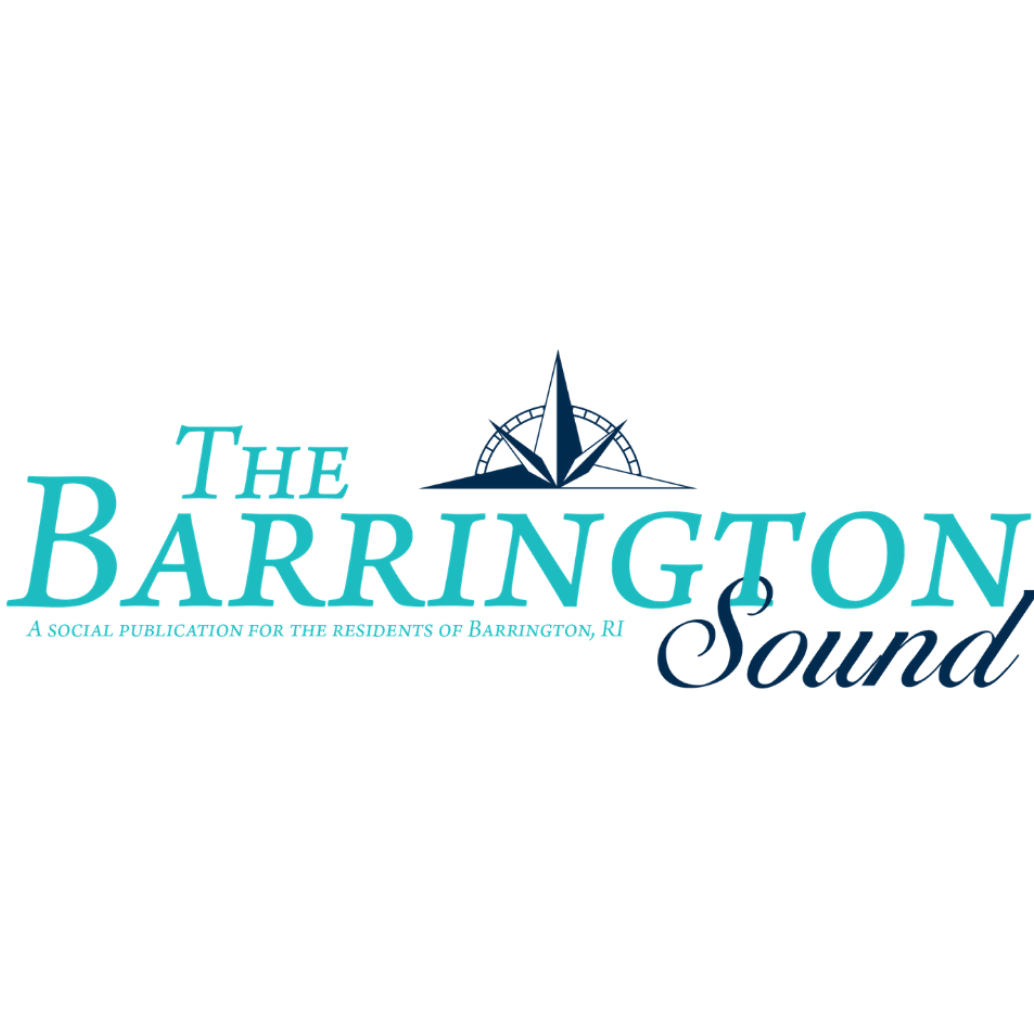 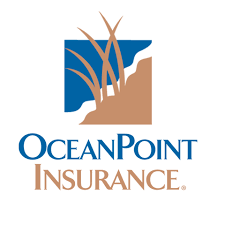 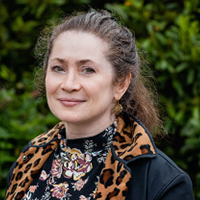 Lisa Lowenstein, A Barrington native, is the Founder and Director of the Festival. Lisa’s parents are both RISD graduates. After an MBA at London Business School (Distinction) and 17 years living in Europe, consulting to museums and cultural institutions, Lisa returned stateside in 2009. Since 2010 she has been working in the area of creative placemaking (community building) and the re-envisioning of public spaces with arts programming as catalysts for community transformation.

Lisa can frequently be seen walking her black and white spotted hunting dog, Lucy, around downtown Barrington often on the Town Hall grounds. It was on these walks that she began observing the scale of the space, the architectural features of the buildings (Tudor, Elizabethan revival), the beautifully maintained plantings which contributed to creating the many different ‘corners’ of the space, natural and man-made. She then envisioned how the whole campus could be turned into a European-style town center, using lighting and other interventions to temporarily transform the area into a beautiful context, a sort of 'piazza' to build community. 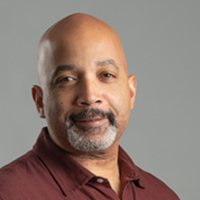 Vince Wicker, a longtime resident of Barrington, Vince holds a BBA in Marketing and Finance from the University of Michigan and an MBA from Emory University. He has more than two decades of strategic management and supply chain consulting experience and works in digital strategy with Accenture. Already as a young college student, Vince was excited about the community and was involved in planning promotions for large campus events at the University of Michigan.

Best known in Barrington as the President of the Library Board of Trustees, Vince was responsible for spearheading the $2.4 million dollar fundraising initiative to renovate the top floor of the library attracting grassroots support, major private donations as well as winning grants from the State of Rhode Island. Vince has lived around the country (Detroit, Atlanta, San Francisco) and together with his wife Maura, they chose to settle in Barrington and raise their two sons, George (a competitive drift car driver and student at URI) and Joe (a successful competitive sailor, and student at University of Miami.) 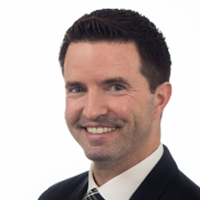 Bryan Hoffman is originally from Westchester County, NY. He moved to Barrington in 2019 and is an active member of the community, serving on the Boards of the Barrington Business Association and chairing the committee on public relations for the East Bay Chamber of Commerce.

Bryan is a Financial Services Professional with a focus on estate planning, retirement planning, and educational planning. The hallmark of his practice is listening to his clients and tracking legal, tax, and market evolutions that impact legacy planning, and tax efficiency in retirement. A graduate of the University of Delaware, Bryan has an extensive background in the wine business dealing with domestic and international vineyards.

A sports enthusiast, Bryan enjoyed being a volunteer coach for the Special Olympics in Boston for many years. Bryan coaches t-ball and soccer. Bryan’s fiancé, Courtney Capizzo, grew up here in town. They have two children and are excited that the eldest, Spencer, will be in school at Primrose Elementary in the fall, while Piper attends pre-school. Bryan is a passionate reader and writer and self-professed film buff. 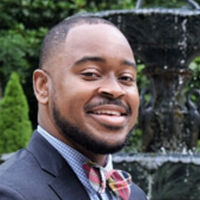 Braxton Howard Medlin, Esq, is a trial attorney hailing from Chapel Hill, NC. He moved to Barrington, RI, in July of 2020. An avid runner, he has always been invested in community building, whether through fitness, arts, or the pursuit of justice. After earning his bachelor’s degree in Romance Languages (Spanish) at North Carolina A&T State University in Greensboro, NC, he completed two years of AmeriCorps service. He worked with the ACCESS Project as a Family Support Specialist, providing education and wellness outreach programs to individuals, families, and immigrant communities in rural North Carolina.

Braxton earned his Juris Doctor from Roger Williams University School of Law, where he was President of the Student Bar Association, a CALI Award winner in Trial Advocacy, and the recipient of the 2019 Public Interest Award. He and his fiancé live in the Hampden Meadows area of Barrington with their twin boys. 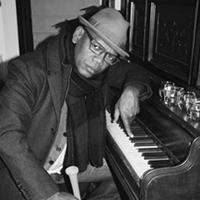 Originally from St. Louis, he is a classically trained actor/director who studied at the National Shakespeare Conservatory in NYC. His move to Rhode Island was intended to be temporary but a taste of living on the ocean is all it took to convince Mays to stay and wonder why anyone would ever leave the east coast. His connection to Barrington goes back to the mid-1990s when he served as an advisor to the Town’s Substance Abuse Prevention Task Force. He then worked as a college recruiter. Now you can spot him cruising his favorite bike path on the weekends. Mays currently has his eye on several Barrington locations, including the town hall, for his upcoming film which will be set in the 1930s-40s.

Mays’ film credits include one feature film, an HBO short film, a documentary, and several short films and scripts. As a theatre director, Mays has worked with several local theaters including The Providence Black Rep and The Wilbury Theatre Group. (Please also see: Jury) 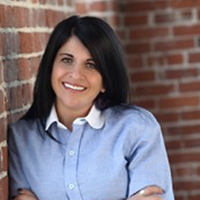 Danyca Hope Penick is the publisher of The Barrington Sound magazine. She is dedicated to speaking up for the rights of ALL, especially for those who cannot speak for themselves. She believes that as long as even one form of prejudice exists, no form of prejudice can be completely eradicated. For that reason, she stands for animal rights as well as human rights.

An animal lover and advocate, she believes that change can be made every single day starting with your breakfast. While it can seem difficult to imagine how to satisfy the eyes of future generations, Danyca believes that making small changes in our daily habits will lead to a future where all are free. 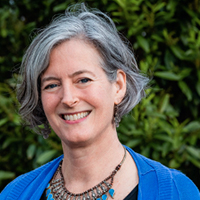 Louise Sloan is a writer and editor. Her articles and essays have appeared in numerous publications including the New York Times, the Boston Globe Magazine, Out, and Glamour. Her work has won national awards including the James Aronson Award for Social Justice Journalism. Her book, “Knock Yourself Up,” a memoir and report on becoming a single mother by choice, received international media attention, including Nightline, Newsweek, and 60 Minutes.

She is a member of the LGBTQ community and her work for Glamour and Ladies Home Journal on LGBTQ issues won a National Lesbian & Gay Journalism Association award and was nominated for a GLAAD award. She has been involved in antiracist and racially inclusive journalism since the 1980s, including the creation in 2003 of a nationally distributed Black Community HIV magazine that morphed into Real Health, an ongoing quarterly.

Louise and her son, now 15, moved to Barrington from Brooklyn, NY, in 2015. Her first date with her now-husband was that same year—a walk on Barrington beach. The family of three lives in Barrington with their two dogs, Roxy and Snowball.